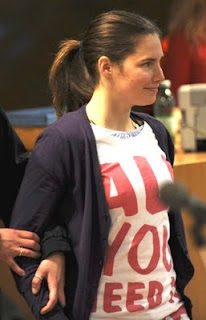 The Amanda Knox apologists will stop at nothing to try and convince the world that she is nothing more than a victim of an ‘archaic Italian Justice system’ and an unstable prosecutor. In the latest attempt to do so, a recent TIME magazine article headline actually asked, Could Amanda Knox Have an Autism Spectrum Disorder? Aside from the author’s clear ignorance of the case against Knox, she actually entertains the idea that Knox may have suffered from Asperger’s syndrome—a less severe form of autism—that caused both her unusual social behavior and a gullibility that triggered a false confession.

The author cites Valerie Gaus, a psychologist who has worked with hundreds of autistic people and is the author of Living Well on the Spectrum. “Everything I read would be consistent with it and it could be one alternative theory for the behavior that made her seem suspicious,” says Gaus. The author appears to base her assertions on the behavior of Knox at the police station the day that Meredith’s body was discovered. Somehow, this Knox apologist has attempted to spin the statements of Meredith’s friends—who said that they all suspected Knox after her odd behavior—into a mental disorder that somehow ‘proves’ her innocence. It is uncanny how far these Knox apologists will stretch their minds to believing in her innocence. 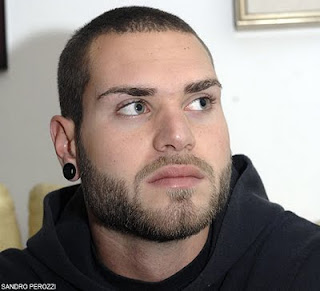 Let’s revisit what Meredith’s boyfriend at the time of her death, Giacomo Silenzi (who lived in the apartment below), told Nick Pisa of the daily mail in November 2007. Giacomo suspected Knox was the killer long before it was made public that she was a suspect. In fact, it seemed to be a unanimous decision of all those who witnessed Knox and Sollecito at the police station the day that Meredith’s body was discovered. Does Sollecito also have this disorder?

“I couldn't help thinking how cool and calm Amanda was. Meredith’s other English friends were devastated and I was upset, but Amanda was as cool as anything and completely emotionless,” Giacomo said. “Her eyes didn’t seem to show any sadness and I remember wondering if she could have been involved. I spoke with her English friends Robyn [Butterworth] and Sophie [Purton] afterwards, and they said the same thing. None of us could quite understand how she was taking it all so calmly. I knew that Amanda didn’t get on with Meredith, but I didn't think that would lead to Amanda killing her…If I could see Amanda, I would just ask her, 'Why? Why did she kill Meredith?'”

Were all of these witnesses in on the “so called” conspiracy to convict Knox, was Knox simply suffering from a mental disorder that made her look completely guilty to all who witnessed, or are these just excuses made up in order to justify abnormal, speculative behavior? Dr. Coline Covington, an experienced psychotherapist who has studied at Princeton University, Cambridge University and the London School of Economics, seems to have a very different diagnosis of Amanda Knox. In a December 2009 article, Dr. Covington suggested that Knox showed signs of being a psychopath:

“Knox’s narcissistic pleasure at catching the eye of the media and her apparent nonchalant attitude during most of the proceedings show the signs of a psychopathic personality. Her behaviour is hauntingly reminiscent of Eichmann’s arrogance during his trial for war crimes in Jerusalem in 1961 and most recently of Karadzic’s preening before the International Criminal Court at the Hague.

The psychopath is someone who has no concern or empathy for others, no awareness of right and wrong, and who takes extreme pleasure in having power over others. The psychopath has no moral conscience and therefore does not experience guilt or remorse.

Most psychopaths are highly skilled at fooling those around them that they are normal by imitating the emotions that are expected of them in different circumstances. They are consummate at charming people and convincing them they are in the right. It is only when they reveal a discrepancy in their emotional response that they let slip that something may be wrong with them.

The psychopath is the conman, or in the case of Amanda Knox, the con-woman par excellence. Her nickname ‘Foxy Knoxy’, given to her as a young girl for her skills at football, takes on a new meaning.

Whether or not Knox, who is appealing her verdict, is ultimately found guilty, her chilling performance remains an indictment against her. Her family’s disbelief in the outcome of the trial can only be double-edged.”

Then there is the analysis of Professor David Wilson, one of Britain’s leading criminologists and is the author of ‘A History of British Serial Killing, 1888-2008’. Dr. Wilson analyzed Knox’s confiscated diary at one point and gave his analysis in a video on Sky News (The video has since been removed). Thankfully, I had transcribed his comments word for word more than a year ago. In his anaylsis, Dr. Wilson said:

“I have absolutely no doubt that Amanda Knox is guilty of murder. I know there’s a great deal of speculation in relation to the evidence that has been presented in the Italian courts; that it was circumstantial. But actually, it was DNA evidence that linked her, quite clearly—incontrovertibly, to the crime. I’d also say, having read her prison diaries, that this is a woman who was clearly involved with an older more experienced boyfriend who introduced her to a lifestyle—it would seem—that allowed her to bend the rules of morality that would guide her behavior, perhaps, in the United States, so that her behavior was different in Italy."

"Because this case has gone on for some two years, very early on, after Amanda Knox’s arrest and imprisonment in Perugia, I was sent her diaries that she had been keeping whilst in jail, to analyze. Having gone through those diaries quite carefully and repeatedly, I would say that a woman emerged (a picture of a young woman emerged) who was self-obsessed, who showed a lack of remorse, who was enjoying the fame and notoriety (the infamy) that had been attached to her as a result of this crime. She enjoyed the sense in which other men in the public were finding her ‘Hot’ as she [Knox] would say. There was a great deal of grandiosity in these diaries. In other words that she sees herself as a bigger personality than she had hitherto been, and she was rather enjoying that behavior. I can give you an example that talks about that grandiosity.”

“She says for example:

‘I know this sounds babyish, but if anything in the world that is unfair, this would have to be up there; not that martyrs and things don’t take the cake, but I’m innocent too. And even though I haven’t been killed, I’m not being allowed to live either.’

“So there’s: (A) the sense of self-obsession; this is all about her—the person who is missing in those statements is of course Meredith Kercher—and (B) there’s also this grandiosity; this sense in which she equates herself to that of a martyr and being martyred by this process. For me what again comes through the diaries in these early phases after her arrest is the sense in which she is still under the spell of her ex-boyfriend. And I have no doubt that his participation in creating a world in which murder could be committed, was the dominant participation.”

Most Popular Posts of the Month

Will Savive
NJ, United States
Will Savive is an author and criminologist with a B.S. in Criminal Justice with a concentration in Forensic Science from American InterContinental University (AIU). Savive specializes in True Crime stories.